What is it like to be a member of the live blue Service Corps? What, exactly, do we do? The experience is a bit different for everyone. So in our quest to tell the story of the Service Corps, we asked our community to share their experiences

Paula Renaud is one of our live blue Service Leaders, volunteers that organize and lead projects in the field throughout the year. During the summer of 2016, Paula worked with the Massachusetts Office of Coastal Zone Management to monitor the spread of invasive species growing on floating docks in Marina Bay, Quincy. By returning every month, CZM (and our volunteers) could see how invasive species populations changed over time, while improving their skills at identifying and detecting new species. Paula led this project several times over the summer, and has this to say:

“I became part of the Live Blue Service Corps because I wanted to expand my contribution with the New England Aquarium, and be part of a group that disintegrates boundaries to service. Too often volunteering is only available to those with a higher socioeconomic status; those who can afford to live in the city in which volunteers are needed.

This past summer I met many volunteers and heard various stories as to why they were participating. Most signed up for the Service Corps because they lived further out so it was tough for them to get in to Boston on a consistent basis. Some signed up because the project sounded cool and they had nothing else lined up for their summer weekend. But one story intrigued me and made me realize just how much of an impact we’re truly making. One of our volunteers brought a teen she and her husband were looking after for the summer.

The volunteer shared with me that she brought him out to get him comfortable and unafraid of the physical world by touching and feelings things.  I could see his hesitancy when we first started as he watched from a distance, curious, but wary, and kept his hands in his pockets.  I left him alone and just checked in every now and then and made sure to pick up lots of different things so he could see they weren’t going to hurt him.

The picture below shows his progress – he’s in the middle laying on the dock and looking at creatures that were pulled up. By the end of the day he was asking me questions and bringing me various things he had found, but what surprised me the most was he actually touched a tunicate! I couldn’t believe it!

This is an excellent demonstration of eliminating boundaries to service…and the great thing is while doing this, we can also eliminate people’s fears – whether they are fears of meeting and working with others, fears of the physical world, or just fears of the unknown.” 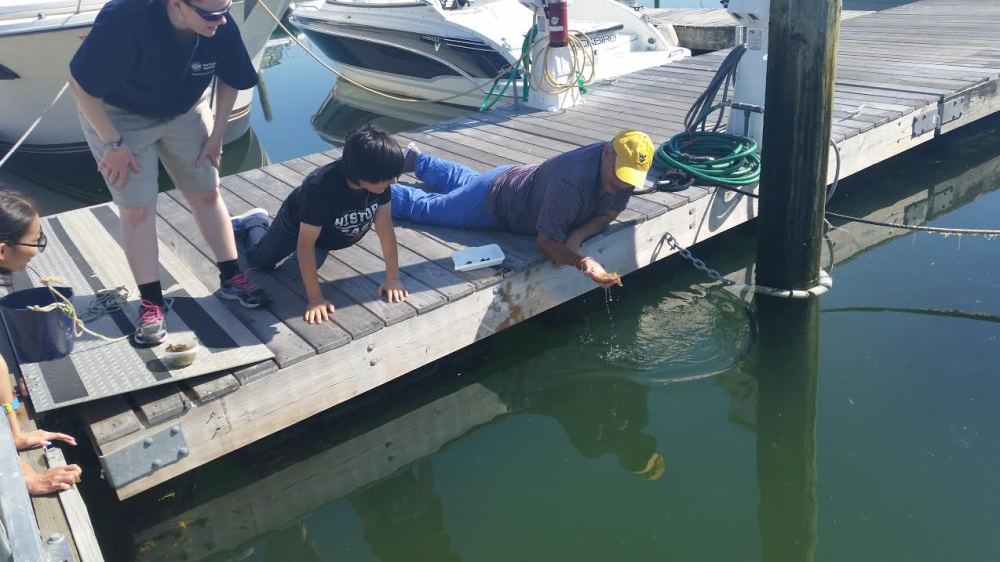